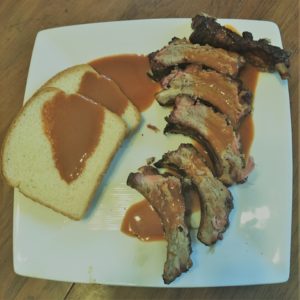 Yesterday (and usually once every month), I had a craving for ribs. What I didn’t have was a desire to spend 30 bucks for a rack of ribs from someplace local or to spend my Saturday tending to my smoker. Not that I had anything better to do, but I was kinda hungry and didn’t want to prep and wait 4 hours before heading to a friends house and gettin’ rib-diclous.

So, I did something I’d been wanting to try for awhile. I cooked ribs in 60 minutes. And … they weren’t terrible? In fact, I don’t think I’ll ever smoke ribs again! Interested? I’ll share my method and results here.

A little background first … and I hate when I’m looking for a recipe and someone starts in on the history of hard boiled eggs or how the best breakfast casserole was made by their grandmother in Saskatoon during a snowstormZZZZZZZZZ … so if you want to skip this part and go straight to the technique, click HERE.

I grew up in Tuscaloosa, Alabama. I won’t bore you with the specifics other than to say ROLL TIDE and remind you that Tuscaloosa has two of the best, no, the two best, rib shacks in the world, that being Archibald’s and Dreamland. I won’t pick a side other than to say you can’t go wrong with visiting either original locations. And I enjoyed many a rib from both locations while I lived there, all while being wholly ignorant (until finding out a couple of years ago) that neither location smokes their ribs. I just assumed that’s how ribs were made tasty and there was no other way about it. I guess staring at a guy flipping ribs over a hot fire pit didn’t register with me, because it wasn’t until I read this article that I became wise to the fact that they GRILL their ribs. I love this quote from the originator Big Daddy Bishop (the badass pipe smoker on the Dreamland logo himself):

“Most people cook their ribs from two to four hours,” Dreamland regional manager Matt Kilgore says. “We’re cooking ours 45 to 55 minutes – the reason being is that Mr. Bishop used to say he had better things to do than watch a piece of meat smoke all day.”

Now again, when friends and beer are involved, I don’t mind tending the smoker, but this spoke to me. And then, I recalled hearing from somewhere I can’t recall, that Archibald’s did the same. Even though I have smoked many a rib, received kudos on those ribs, enjoyed those ribs, man, if I can pull it off halfway as good as those guys in 1/4 of the time … I had to try it. So off to the internet I went to find tips on grilling ribs the Dreamland/Archibald’s style.

I didn’t find much. This guide was a good start, but I didn’t have the wood they recommended, nor did it say exactly how hot the fire needed to be. So I winged it … and here’s how it went. Combine the two and you should be gnawing bones within the hour, give or take 20-30 minutes!

VERDICT: DELICIOUS. I never let the ribs sit in one spot long enough to char or produce much of a bark. They ended up a beautiful golden brown. The meat sliced like a juicy steak, and pulled off the bone easily … it didn’t fall off or anything, the bones stayed intact, but the meat tore away with ease and had almost a tender pork loin consistency. Pair that with the sauce, and man … I’m never going back.

So this blog is normally IT focused, and I guess if I had to come up with some allegory, it would be, get out of your comfort zone every once in awhile. You see a new technique or hear about an approach that is generating a lot of buzz, don’t hesitate to check it out. Lab it up, try it out, see if it works for you. It may change your way of doing things for the better, or at least the quicker. To free up your time for other things.

…. or at least free you up some time to find some other things to do!